The latest competition was in the Ghostbusters theme. The main idea was a simple strategy game, where players took control of a squad of busters with the aim of capturing more ghosts than the opponent. This one was interesting, as opposed to previous games the participants needed to micro-manage each individual buster while also coordinate their tactical actions to achieve victory. Another nice addition was uncertainty, as fog of war covered the areas where the player’s busters were not present. 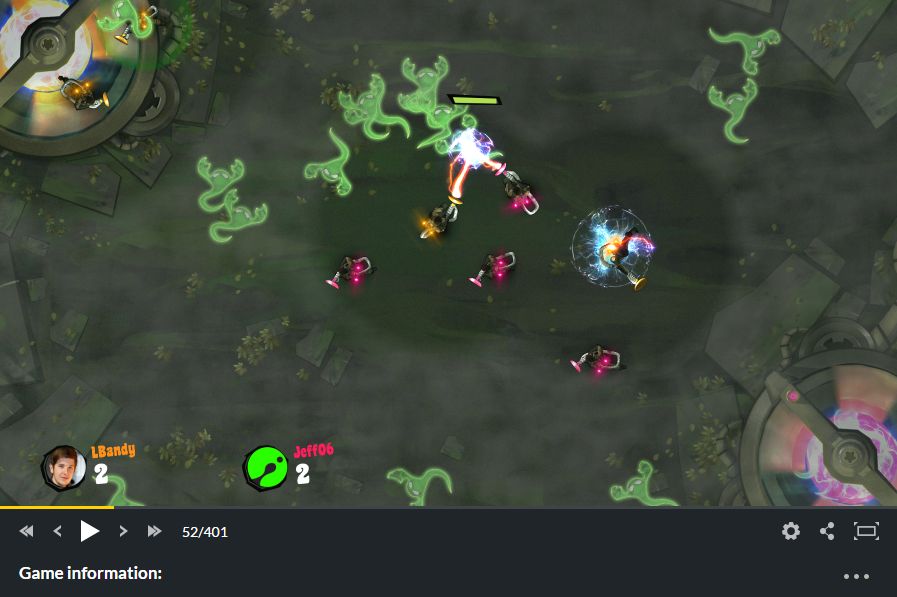 My approach was to create a multi layered system. On top there was a high level tactical analyzer which based on observations of the current game state defined the policy to act upon. These policies were predefined, like explore, camp the opponent base, protect the ghost carrier, etc… After the policy has been selected the tactics has been boiled down to the buster level, which all had a mini behavior tree-like state machine. Each buster received an order and executed it based on it’s current state and circumstances. Following the above they were able to pull off some coordinated actions while also being able to be aware of themselves and react to their environments properly.

This problem was really different from the others as it couldn’t be reduced to a search problem and solved using common methods, but instead required some actual AI-logic coding. It was fun and refreshing. As it’s a bit hard to see what’s happening on the picture, I recommend checking out the replay to get a sense of what’s actually going in here: https://www.codingame.com/replay/113717889